The release of one of the movies for 2013 has resulted in a revived interest in the clothes and décor of the decadent 1920s.


The Great Gatsby, Scott Fitzgerald’s opulent tale highlighting the garish society of the roaring twenties, has seen us enthralled, not just by the storyline, but also with the hairstyles, costumes and interior design of the period.


This was an exciting decade for fashion and as is often the case, revolutionary fashion is often reflected in the home too.  As women showed their ankles for the first time and bobbed their hair, interior design styles such as Bauhaus was making an impact and art deco became the new style for the sophisticated.


In the home, flooring is likely to have been polished parquet or lino in the black and white chequerboard design.  These would then be overlaid with large rugs, often circular, which would become the focus of the room, and help zone areas of interest.


FrithRugs offers a dazzling array of circular rugs featuring modern as well as traditional design. Our handmade round rugs can be custom-made to your exact specifications, making these even more adaptable to your own home and 1920s design. 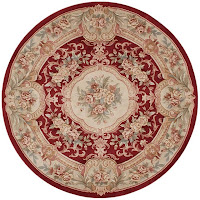 The traditional was making way for a new style of geometric and angular shapes. This
black and cream geometric rug design is perfect for anyone looking to recreate that look in their own home and it sits well with the chrome and glass which was replacing walnut and rosewood.

Balck and white also complements the new images of cruise liners and skyscrapers which ousted the gothic ornate bust and sombre family prints.  Accessories were kept to a minimum with one or two very strong pieces rather than the clutter so beloved of the Victorians.

Safaris and travel to exotic destinations were also popular and so people were keen to inject some exotic touches from their travels into their home.  This Leopard Animal Print Indian Rug design suggests the thrill of the hunt and would have been used with other animal ornaments and art.
So to summarise:  1920s style is a look that still works well today and it’s easy to recreate it in your own home with a minimal, clean look and just a couple of well-chosen accessories such as a geometric or circular rug, glass furniture, metallic artwork and plain walls.

The FrithRugs name is synonymous with traditional rugs and these are true masterpieces that never go out of style.  What’s more, a trad... 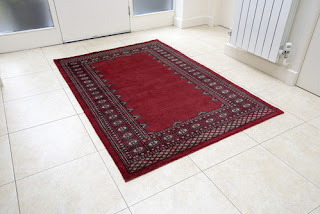 FrithRugs
FrithRugs has the largest choice of rugs and large rugs in the UK including hand-woven masterpieces from all over the world. We have four outlets across the UK in North Wales, Staffordshire, Warrington and Shrewsbury and several local stockists. As well as our traditional rug collections we also offer numerous contemporary rug collections which are exclusive to FrithRugs. www.frithrugs.co.uk or telephone 01745 584404